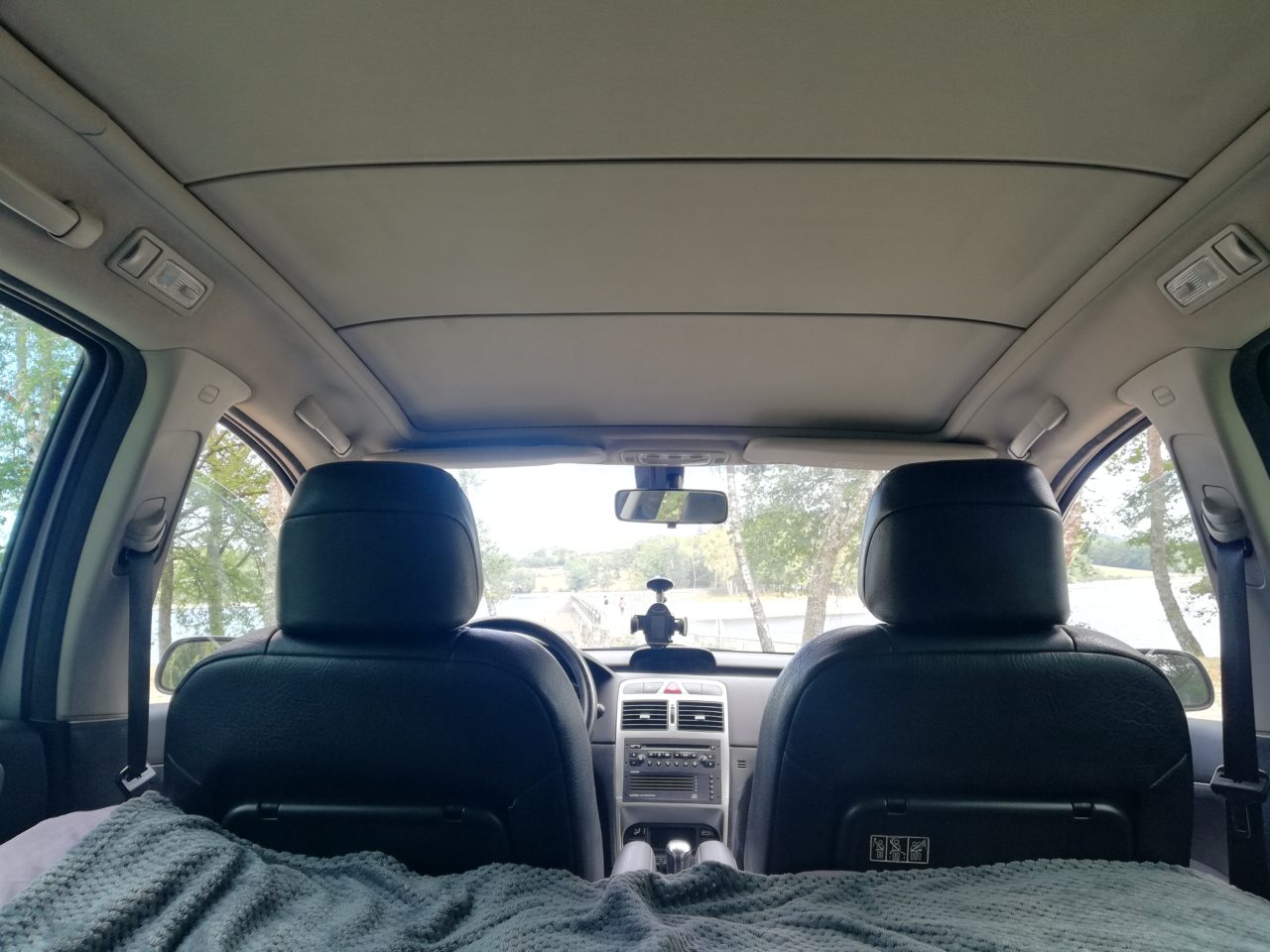 Since I love travelling but I’m quite short on money, I decided to convert my dad’s car into a bed on wheels. This is also a first try out before buying (or not) a van! I have been quite obsessed lately with the van life mouvement and I thought “that’s for me“.

Getting used to sleep outside camp sites, learning how to reconcile with the night (its noises, its darkness…), stepping out of my confort zone, these are some of the first steps before achieving a bigger dream: travelling in a van. This car conversion on a budget should hopefully help me to decide if this is something I would (and could) do for a longer period of time.

Of course, the set up is rudimentary and some aspects of sleeping in a car will no be a problem for a van (vent system, cooking space, toilet for some, etc.). I already know that I couldn’t compromise on a toilet but I could sure give up a fridge! I guess this is a good start to see what will and will not be helpful or necessary later on.

But for know, let me show you the steps of my first car conversion….

The very first set up was extremely limited dut to time and money. I reused the mattesses of my parents’ caravan (they were used to assemble the “dining room” into a 2-person bed) and placed them in the back of the car. The floor was uneven but fortunately, the mattresses were thick enough! Adding bedding, a crate for food, another for hygiene products, and we were good to go…

The second set up was made so I could have a flat floor and more storage. I initially planned to add 2 drawers at the back but decided that for now I would spare the price and time (even though I left a space big enough to add them later on if I want to). I also wanted to have a little cabinet when I’m alone, that would be more accessible than the trapdoor behind the seats. But, you know, more wood, more money, more difficulties…

Ta-daaaa! Imagine some bedding, fairy lights and some good books and here I am! I am quite satisfied with the work, even though it is limited. Now with the platform, I can’t really sit up straight, but I can still eat or use the front seats if I need to.

I cut out some cardboard and reuse the blinds of the caravan to make some window covers. Not too pretty but very useful. I still need to make another one for the back window, but I manage to travel for 3 nights without.

For the front, I use a dark gray polar blanket (during the day I use it to cover the bedding so people won’t notice the installation) that I hang across the seats. I tie a small string on a corner, tense the cover and close the door on the string to hold it in place. I repeat the same thing on the other side and boom! DIY front cover.

I tried this set up a few weeks ago at the Lake of Vassivière and it was great! You can read more about that here…

I’m a 27yo French woman who have a passion for travels, languages and cultures. I decided to create a blog to keep a trace of my trips and share it with other travel lovers or dreamers. So join me on board! Plus

This website uses cookies to improve your experience while you navigate through the website. Out of these, the cookies that are categorized as necessary are stored on your browser as they are essential for the working of basic functionalities of the website. We also use third-party cookies that help us analyze and understand how you use this website. These cookies will be stored in your browser only with your consent. You also have the option to opt-out of these cookies. But opting out of some of these cookies may affect your browsing experience.
Necessary Always Enabled
Necessary cookies are absolutely essential for the website to function properly. These cookies ensure basic functionalities and security features of the website, anonymously.
Functional
Functional cookies help to perform certain functionalities like sharing the content of the website on social media platforms, collect feedbacks, and other third-party features.
Performance
Performance cookies are used to understand and analyze the key performance indexes of the website which helps in delivering a better user experience for the visitors.
Analytics
Analytical cookies are used to understand how visitors interact with the website. These cookies help provide information on metrics the number of visitors, bounce rate, traffic source, etc.
Advertisement
Advertisement cookies are used to provide visitors with relevant ads and marketing campaigns. These cookies track visitors across websites and collect information to provide customized ads.
Others
Other uncategorized cookies are those that are being analyzed and have not been classified into a category as yet.
SAVE & ACCEPT